Front of closets in the entryway.

We knew that we needed lots of closets in the apartment but we wanted them to be functional as a room divider as well.   When we were still in Los Angeles, Ikea was having a great sale on their PAX gray glass sliding closet doors, so we decided to design the wall of closets around those.   They were only available in one size (really tall), so we went with it because it was too beautiful and cheap to pass up.  We bought 3 sets to make 6 closets in a row,  measuring about 8 feet tall by 15 feet long.

Since the backs of the Ikea closets are crappy chipboard and not meant to be seen, we bought thin drywall to cover them and make them a solid wall.

The drywall made 6 separate closets into one fluid structure.

I used a fun pink joint compound that turns white when it dries to smooth out the grooves between the drywall and where the screws where holding it onto the closet.  When it dried, I sanded it down and did one more coat of compound because it wasn’t quite level yet.

Pink joint compound for girls who like to build things!

Joint compound smooths between the drywall sheets and where the screws are.

When that coat dried, I primed the wall twice and then wallpapered for the first time!

LOVE this paper! Fishes kiss and jewels dangle with squid.

First area done. Onto the other paper.

I used two different prints from Anthropologie to establish the main bedroom and the guest room.

Both areas done, before the trim was added.

When the wall was completely dry, I added a base board to visually anchor the wall in the rooms and make the unit look built in to the space.  The curtain between the spaces really helps to separate the two rooms even when it is drawn back.

I’ve always wondered why Ikea hasn’t come up with a wall system yet, where you can buy and assemble segments of walls to divide a space however you want, but until then, we will always look at their furniture as potential dividers with this easy process that makes it look good on both sides!

Half bath after ripping up the floor, but before anything else.

After the first week of hell in our loft renovation project, I decided to take on the bathrooms in the second week and finish them top to bottom.   The first thing I did was mask off behind the horrible pipes and spray paint them black.  I used your everyday, Rustoleum black spray.   I did 3 light coats so the pipe joints didn’t get too clogged with paint and prohibit a plumber from undoing anything in the future if they needed to.  What a difference a little paint can make! 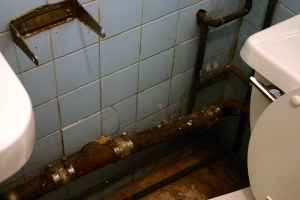 Pipes before painting. So gross.

I used whatever I could find to mask off the wall behind the pipes.

In their original state, the floors were tiled and frankly, disgusting.  The mildew or dirt or whatever was on the grout was so set in that even straight bleach didn’t seem to do the trick.   My first thought was to clean the grout with a very serious grout cleaner and hope for the best, but the tile work was so old on the floor that it was crumbling underfoot anyway.

While Jeff was away at work I “accidentally”  ripped all of it up with a chisel and in moments of anger, my bare hands.  It just seemed better to prime and paint the cement floors like the rest of the apartment rather than struggle with cleaning something horrible and ugly.   After that, I was still going to chemically clean the grout on the wall tile, but it was also in such bad shape, dirty and crumbling with chunks missing.    So, I decided to regrout the walls with a lot of help from some online sites.

These are the steps I took to regrout (I am no professional, but this did seem to work):

1.  Remove the old grout.  Mine was obviously really old so this actually wasn’t as difficult as I’ve read that it can be.  I used a phillips head screw driver and elbow grease to scrape as much as I could out of the grooves.   I did buy a tool that also does this job, but the grout lines were too thin for it to do much, so I improvised.

2.  Clean the grooves with a harsh grout cleaner to prime any leftover old grout for the new.   I used a small nylon brush, rubber gloves and an industrial grout cleaner from Home Depot.   This stuff is crazy toxic, so be careful, but also be thorough to make sure you’re getting all the junk out of the old grout that might make the new stuff not stick as well as it could.

4.  Grout.  I used a premixed bright white grout from Home Depot and…my finger.  I tried all the tools available, but again, the grooves were just too small and I wanted to make sure it was really squished in there.  After each line, I used a damp sponge to help squish it in more and clean up around the tile.

5.  After 4 hours, you can clean the tile with water to remove any haze, but wait 48 hours to clean with anything else more abrasive. 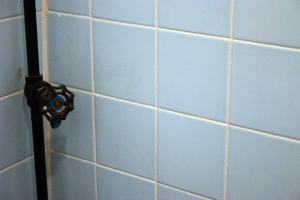 This job was hard, but it definitely could have been harder.  I do recommend doing this yourself if you have the patience and energy because it was really rewarding and REALLY cheap.

After all that, I replaced the toilet seat ($12.00 at Home Depot), primed the floor, painted the floor, and installed a new toilet paper holder and towel rack (about $16.00 total from Ikea). 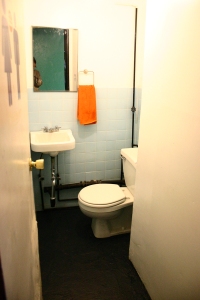 One response to “Fix”