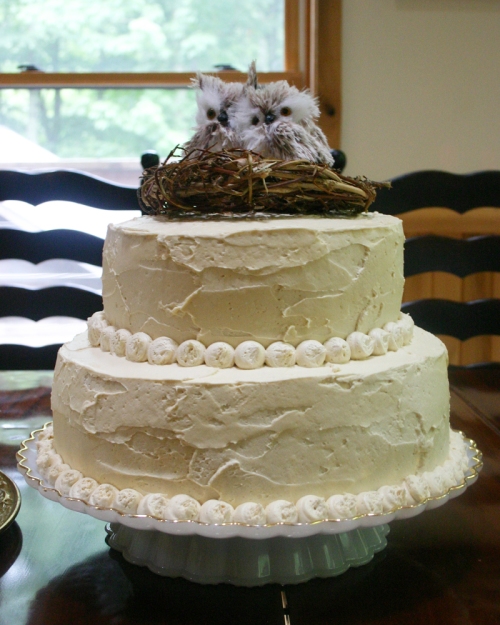 The largest cake was a yellow cake with salted caramel buttercream. It had two tiers and an adorable owl topper.

When your little brother and his fiancée ask you and your dad to make their wedding cake, you say “of course”, but when they ask if you can make THREE, you choke a little, then smile and still say “of course”.   They insisted that they wanted something simple and rustic, but when you have to make cake for 150 people in a rented home kitchen, things will always get a little interesting.   We had made three cakes for our wedding as well with only a few hitches, but we rented an industrial refrigerator for them and bought vanilla buttercream instead of making it ourselves (a huge time and money saver!).  These two crazy kooks wanted flavored buttercreams and one carrot cake, so everything was made from scratch in many, many batches. 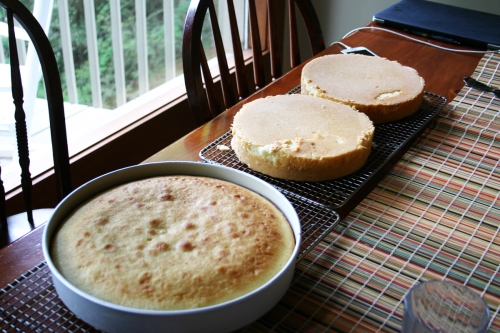 Some of the many layers, cooling on the table. 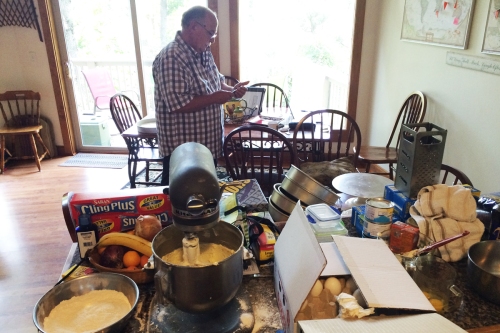 Giant cakes in a tiny kitchen. My dad is a pro…but it’s really hard to keep such a tiny work space tidy!

We used the Magnolia Bakery recipes for the carrot cake, yellow cake, cream cheese frosting and chocolate frosting.   I suggest testing any recipe you are doubling or tripling in your size pan well before the big week, and baking each in the oven separately if possible so they don’t burn.  It will take longer than the recipe says if you are using a full batter recipe in a 14″ pan, for instance, than it would in two or three 9″ pans.   Also, be sure to use an oven thermometer! I’ve never met a standard oven that was truly the temperature you set it at.

This is the carrot cake before it collapsed.  Ah! How lovely it was…

The two major problems we had were with the carrot cake and the caramel frosting.  The carrot cake was delicious and a crowd favorite in the end, but so flat when it came out of the oven!  If we had more time or more ingredients on hand, we would have made another layer to make it the same height as the other single tiered cake, but instead we stupidly decided to make up the difference with frosting… Needless to say, it collapsed in the heat and humidity on the day before we cut it.  Hopefully the wedding photographer got a decent photo of it before I was serving it up with a spoon! 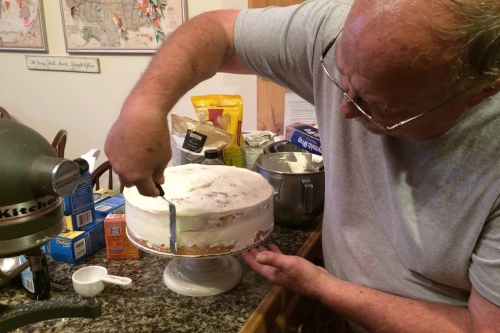 Here’s my dad, proving to me that he can use the turntable thingy way better than I can.

We tried two different caramel buttercream recipes before we had to throw all the recipes out and make something up ourselves.  Nothing actually tasted like caramel!  The end result was so delicious and tasted exactly like salted caramel, but I would probably tweak the recipe even more in the future by using a real caramel syrup instead of Hershey’s.    Since we didn’t have a fancy store nearby nor the time to make our own, we had to improvise!  Here’s what we came up with:

Cream the butter in a mixer on medium high until light.  Add the caramel sauce, vanilla, milk and dark corn syrup one at a time, blending well between ingredients.  Add the salt and confectioners sugar a little a time on low and then beat until well mixed.  Add more sugar a little at a time to stiffen the frosting only if needed.  You can also chill it a bit before using to firm it up. 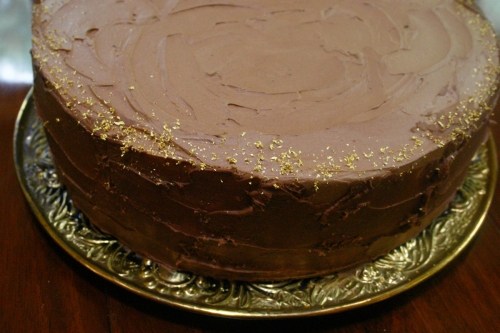 My sister-in-law bought edible gold leaf sprinkles for the edge of the two single tiered cakes.

I’ve been asked many times if it’s logical or even possible to make your own wedding cake and I’ve been to plenty of weddings where that worked out well and saved the couple some money, so if you or your family baker are prepared for the task, I’d say go for it….but always be mentally prepared to buy cupcakes from a grocery store if something goes very wrong!

Here are some tips and things to think about: 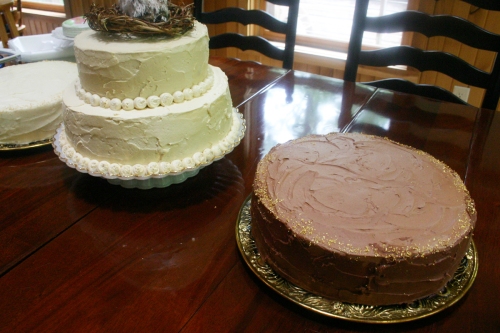