It’s officially been over a year since I last wrote so I thought the best new post would be George’s first AND second birthday parties, both simple (ish) and super unfussy.   But first, let me quickly explain where I’ve been!

We always suspected something might be a little off with G, so we have spent the last year in and out of many doctor’s offices, hospitals and early intervention therapies.  In the end, we discovered that he has a super rare chromosome disorder, so our future has a lot more therapists, doctors and appointments in it than the average family, but overall he’s doing great.

I plan on blogging elsewhere about everything I’m learning in that world, but for now, I’m back to sharing all of my projects, parties and delicious food with you!   More about these two parties after the jump. 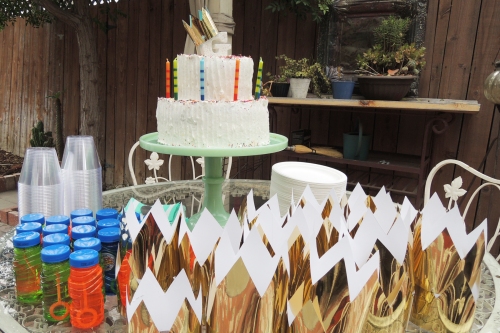 For G’s royal themed 1st birthday, I made simple crowns from gold poster board and thin elastic. The favors were just bottles of bubbles!

For George’s first birthday, we decided to go with a “real prince” theme since we joke that the royal family is always stealing our thunder from their engagement announcement to their wedding to their choice of baby names.  (We had it first!)  I truly believe that the first birthday is really for the parents to celebrate making it through that first year, so my advice is to keep it as simple as possible.   We had crowns, bubbles, a cake, hotdogs and hamburgers….and that was PERFECT. 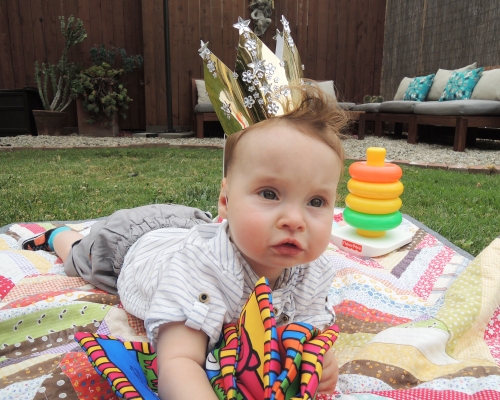 I added bling to G’s crown to make it a little more special!

I repeat…SIMPLE…Here is the BBQ table, with a banner, some balloons and a gold fringe table skirt.

The cake was a double tiered white cake with vanilla frosting and rainbow sprinkles. It’s best to keep the cake simple if you’re letting your 1-year-old eat it. Stay away from nuts and chocolate for this round!

Aren’t we the cutest?!

For George’s second birthday a few months ago, we thought it would be cute to do a “favorite things” themed party.  After an exhausting year, we decided to use the same simple party formula as the year before but instead of making the food, we ordered from a yummy BBQ joint and rented a bounce house for the older kids (and me).  I was shocked to find out that bounce houses are VERY affordable!  Only about $80 for the whole day!  Totally worth it.

So many things from lawn mowers to zucchini pump him up, so I made a hilarious banner with print outs of everything we could think of that he loves. 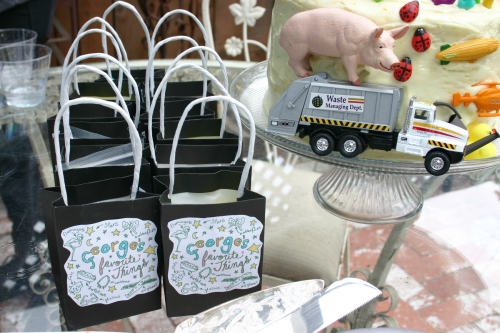 The favors were small bags filled with even more favorites like butterfly and flamingo stickers, tiny airplanes and glow in the dark stars.

The cake was covered in favorites too, like a garden hose, pig, chalkboard and a garbage truck.  I found that stuff on Amazon, at Michael’s in the doll house section and in a few other craft stores.  The icing was a lemon buttercream and the layers were a nice surprising rainbow-colored yellow cake! 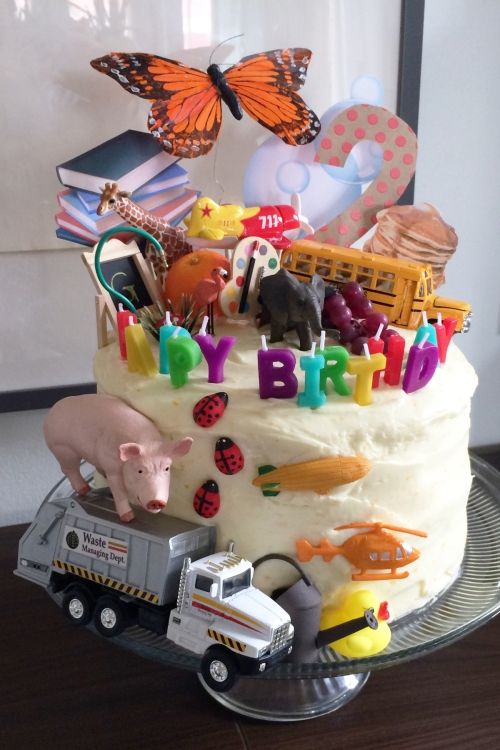 I piled on the favorites, making a simple white cake look glorious! 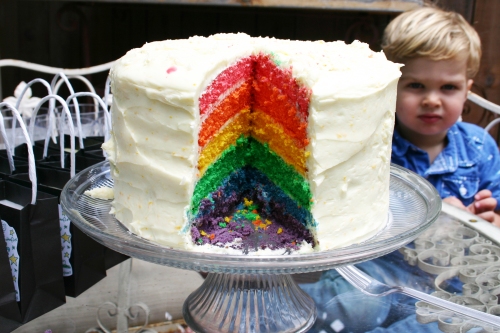 This perfectly sized bounce house for our yard was a huge hit. 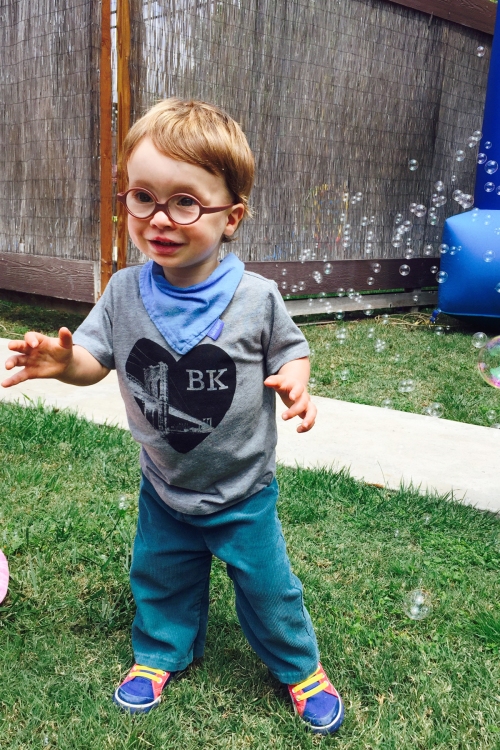 He’s 2! We also borrowed a friend’s bubble machine because who doesn’t love bubbles?!